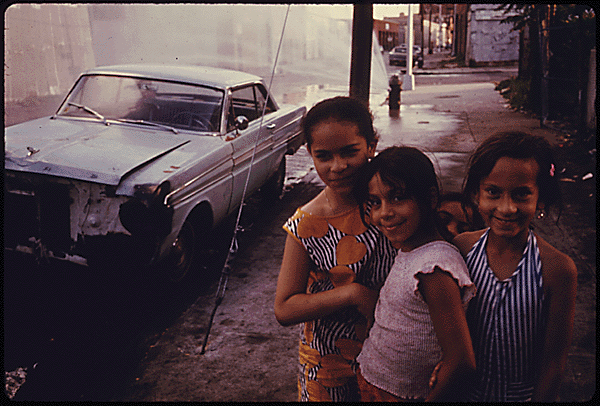 Toxic pollutants. Species extinctions. Overpopulation. In 1970, concern for the survival of the human race in the face of environmental catastrophe culminated in the first Earth Day, April 22. Twenty million Americans across the country demonstrated in support of environmental reform.

“The 1970s, we’re beginning to realize, were a much more important decade than we thought. It’s not just disco and streaking,” said Bruce Bustard, curator with the National Archives, who researched Documerica for the exhibit “Picturing the Century: One hundred years of photography from the National Archives.”

On December 2, 1971, its first anniversary, the EPA inititated Project Documerica to document the successes and failures of the EPA in battling environmental degradation. “EPA has a clear mandate to arrest pollution and to help improve the American environment,” said William D. Ruckelshaus, head of the EPA, in a 1971 press release. “We are working toward a new environmental ethic in this decade which will bring profound change in how we live, and in how we provide for future generations. It is important that we document that change so future generations will understand our successes and our failures.”

Documerica was modeled on an earlier federal documentary photography project run by the Farm Security Administration during the Great Depression of the 1930s. Most of the iconic photographs of that period like “Migrant Mother” were made by government photographers working for the FSA. Arthur Rothstein, one of the photographers from that project and a former editor of LOOK magazine, was hired as a consultant for the project.

Documerica’s objective was not just to document environmental conditions and efforts to improve them, but to create “a collection of color photographs which will be freely available on loan to the media and the public for publication or other communications purposes.”

Project Director Gifford Hampshire encouraged a broad definition of environment to his photographers, who submitted their own project ideas and were hired on a freelance basis. This expansive definition of environment went beyond landscapes and wildlife to include how people interact with the environment: how they control it and are controlled by it. “It’s not all smog and dead fish,” Bustard likes to say when lecturing on Documerica.

By 1974, Documerica had produced more than 81,000 photographs by more than 100 photographers. The strongest 22,000-plus images were catalogued and made available to publications nationwide. They began showing up in textbooks, newspapers, magazines and filmstrips. The exhibit “Our Only World,” a Smithsonian Institution exhibit of 113 Documerica images, toured the country to record audiences and rave reviews.

Throughout the project’s lifetime, Hampshire faced constant pressure to justify its existence. A number of issues brought the early demise to Documerica in 1977, before its 10-year mission could be completed. Publications had limited access to images in the Documerica databank – they were only available at regional offices. Images provided to publications were lower quality duplicates of the original photographs, too low quality for some magazines. And the project was started in the 1970’s, just as picture magazines like LIFE and LOOK were going bankrupt in the face of competition from color television. Perhaps most significant, it was ultimately impossible to defend the existence of a social documentary project within the EPA, a scientific organization. Funding for Documerica finally dried up in 1977.

In a 1974 letter to Picture Professionals, Director Hampshire wrote that “The Documerica file will serve the public interest only to the extent that the images are published.” After funding ended, though, the project was swallowed by the Natonal Archives and it dropped out of public awareness.

More than 30 years later, however, with more than 15,000 images available through the National Archives website, Documerica is finally fulfilling its mission as a document of life in the 1970s.