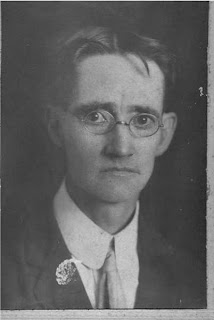 Very little is known about Harry D. Johnson. He was born in New Orleans in 1879, the son of Henry L. Johnson and Agnes L. Heffernan. According to New Orleans city directories and Orleans Parish voter registration records, he made his living as a clerk for New Orleans News Co., and later as a salesman and collector for Julius Meyer’s paper company and finally as a salesman for United Paper Company. Johnson was apparently an active member of the New Orleans Lodge No. 30, B.P.O. Elks. He died in 1962 and was survived by a brother and 3 sisters, one of whom, Hazel Leah Johnson Owen, is the subject of several of these photographs. He is buried in Greenwood Cemetery.

A letter from City Librarian John Hall Jacobs to Johnson, dated August 23, 1956, records Johnson’s donation of 35 of these photographs to New Orleans Public Library. The letter is accompanied by a list of the photographs (a 1990 inventory of the photographs showed that 6 of the original prints were missing at that time; the missing images have not been located). An additional 38 photographs (all taken in City Park) were identified by a former Louisiana Division curator as Johnson photographs and separated from the Alexander Allison Collection sometime around 1990. The evidence used to identify the photographs as Johnson’s is not documented, although the curator apparently based her judgment on internal clues in the photographs themselves.

Some evidence on the photographs from the original donation does suggest, however, that he may have been at least an amateur photographer. A number of the photographs from the original donation are stamped with a circular mark that reads “Harry D. Johnson, New Orleans”; the address 1637 Erato St. (his home address from ca. 1904-1925) has been erased from the center of the stamp in many of the photographs. The stamp is suggestive of the sort of mark a professional photographer might have used to identify his work, although it may simply be an ownership mark. In addition, one image (of Christ Church) retains its original matte, embossed with the name “Harry D. Johnson,” in the manner of professional photography studios. However, New Orleans city directories for the relevant time contain no listing for a photographer named Johnson, and Johnson himself is always identified as a clerk, collector, or salesman. Thus, the origin of the photos in the Johnson Collection remains something of a mystery.